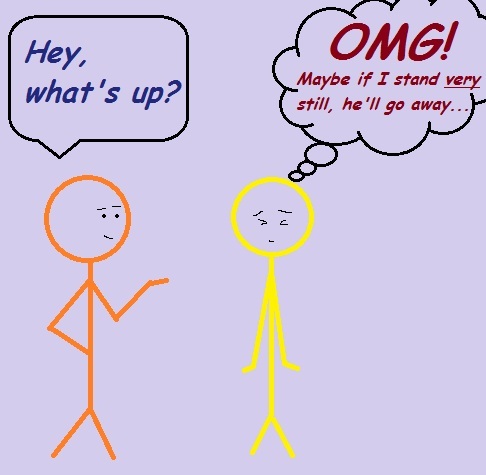 To recap: discussing how to network at conventions (or really anywhere), specifically for writers.

Getting kind of sick me telling you what not to do? (IT Steve: “Yes“) Well, you can try doing the silly things like pushing your manuscript under a door, or cornering an editor/publisher/agent in an elevator. Hey, those methods might even work…kinda. They might agree to see your stuff, but most likely, your stuff will be misplaced or you’ll end up with a form letter rejection.

You can also do things the old-fashioned way: by sending into the slush pile. Hey, it works. Lots of people get ahead that way (I don’t know any…but I’m sure there are plenty). The problem with the slush pile is you’re competing with everyone else, in trying to get noticed by a low-level decision maker. It’s a tough go to do it that way. Plus, it’s time consuming. Some of the bigger houses take 1-2 years just to send you a no. And you can’t submit simultaneously…

So let’s speed it up a bit by getting to meet the decision makers.  You need to do this through the writers. They will make the introductions (Maybe not today, maybe not tomorrow, maybe never, but maybe someday). (Steve in IT: “Give us the condensed version, no one cares about your story – just get to the point“)

Other writers helped me in too many ways to list, but:

So do you want to know how to network? Well, you can google it and find lots of good guides. But really, it’s all about just getting to know people. Get to know the writers. Don’t think about what they can do for you. Don’t overthink it.

Consider this the Coles notes specifically for writers:

It goes on and on. My goal at each gathering is simply to chat with people. Here’s another word that is going to sound really harsh: I don’t want to hear about your book. You can give me a 20-second pitch, but that’s all I want to know, and that’s all anyone else wants to know too. I’m not going to tell you about my book other than: it’s a fantasy novel coming out in blah blah through Dragon Moon Press.

I have my inner circle, but I always try to make new friends. And you know, it got easier and easier. I remember the stark FEAR of not knowing anyone at those first few conventions.

The key to networking is to simply meet people, make friends. The rest of the stuff develops naturally. Don’t breach etiquette when talking with agents, editors, and publishers. It’s not to only meet people that you think are important. It’s to meet anyone and everyone. Just develop relationships. These people will become your friends, and down the road, they might recall your name when talking to someone who knows someone.